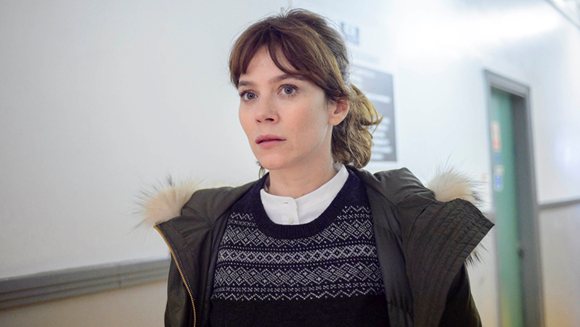 So here it is, then. Ever since it was announced that Hans Rosenfeldt would be following the third series of The Bridge with an ITV thriller, crime drama fans have been rubbing their hands with such ferocious glee that they have been starting fires everywhere they go. It’s an exciting thing to have one of Scandinavia’s premier thriller writers working in this country, presenting us with a new story with British characters. But there’s also another element of interest here – would Rosenfeldt’s series exhibit the same kind of characters and thematic tropes his other great work did? And, would Marcella represent the difficult, uneven sophomore effort, or would it be a seamless transition?

From the start, Marcella had everything that we’ve been used to seeing in a Hans Rosenfeldt drama – dark, urban noirscapes, muted street lamps, rain-stained windows and, crucially and emphatically, a flawed, central female character.

We meet this central character – Marcella Backland (Anna Friel) – in an ambiguous first scene. She rises from submergence in a bath with a start, disoriented and not sure where she is or how she got there. As she turns her face towards the camera we see that her head is stained with blood; her hands dirty and shaking. Around her, tiles are also smeared with blood.

We then flashback to 12 days earlier.

We meet Marcella again as she emerges from a black cab in the pouring rain. She’s talking to her husband on the telephone, both confirming that their relationship is over. She gets back into the cab and goes to her now estranged husband’s place of work to smash up his car. All is not well in the world of Marcella.

And then we see – through Marcella – a possible path to redemption. She receives a visit from DI Rav Sangha, with photographs from a horrifying murder scenes, asking her to take a look to see if she notices anything. The victim’s feet and hands had been tied, a clear plastic bag placed over her head; a bracelet had been taken (it emerged later) as a trophy. The circumstances and modus operandi of the killer matched that of a serial killer – the Grove Park Killer – who had operated in 2005. A case Marcella herself – then a DS – had worked on.

With her personal life in tatters, Marcella jumped at the chance to work on this new case (the HR process of her being re-instated onto the force after 11 years seemed to be more or less waived). We’ve seen this in previous stories and series where a central character who has undergone severe trauma uses a new case to forget and to escape their current personal circumstance. We saw this recently in From Darkness – the lure of a case is too much to resist; even something so dark and disturbing as a serial killer case is preferable to real life.

But, as Marcella eased her way back into incident room life (where she was treated with disdain, for the most part), she was showing signs of disturbing psychological problems herself. She displayed obsessive behaviour towards her estranged husband Jason (quite naturally, after a traumatic break-up), and was also given to bouts of violence and black-outs. She immediately started to follow and stalk prime suspect in the Grove Park killings, Peter Cullan, who had been released from prison and now worked in a bakery on a prison offender work placement scheme and who Marcella is now convinced has something to do with this new batch of murders. She’s reprimanded for her interest in Cullan, who, her colleagues surmise, has paid his dues and is not a suspect in this case. But Marcella is convinced otherwise and eases into the classic obsessed detective, lone-wolf paradigm.

Everything is familiar in Marcella. The central, traumatised female character who shows obsessive behavioural patterns; the dark, urban settings; the array of characters that come and go (remember how many there were in the last series of The Bridge?); and the real aspect of Nordic Noirs that sets them apart from their British counterparts – the ‘second story’.

This time Hans Rosenfeldt’s ‘second story’ focused on a steely businesswoman, Sylvie Gibson (Sinéad Cusack), CEO of DTG Construction, one of the capital’s biggest development and building companies. The Gibson family, especially her grown-up kids Henry (who has a touch of the Kylo Rens about him) and cool, glamorous Grace, are dysfunctional, while the boardroom scenes are classic Nordic Noir.

And who’s Head Of Legal at this company? Why, Marcella’s estranged husband, Jason. When she follows him home to his temporary residence and sees Grace Gibson enter the house soon after, she flips. She later goes to Graces home to confront her and then we flash forward to Marcella’s bloody bath scene, which infers she has once again exploded with violence and done something very bad to Grace.

Elsewhere, we meet a webcam girl and conwoman Cara, who meets people through a dating app and rips them off, another male suspect; a woman called Maddy who is being manipulated by Cullan, as well as the entire cast of characters in the incident room, including a geeky tech-head (a less entertaining and languid version of The Bridge’s John, who I absolutely loved). So there was a lot to take in and digest, but it was layered, structured and paced nicely, with Anna Friel making for a nervy, determined lead, with the more of the Sarah Lunds about her than Saga Norén.

This will be one to watch with intrigue as the plot unfolds.

For an interview with Anna Friel, go here