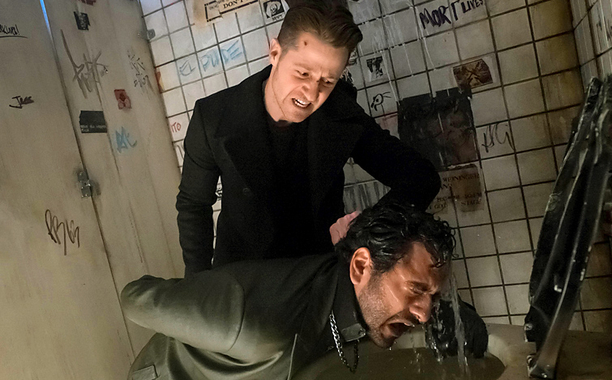 Events in Gotham are coming to a head; Jim Gordon’s out of jail, pardoned, and has nailed his persecutor Ed Nygma; Bruce Wayne has found the killer of his parents, ‘Matches’ Malone.  But the question of who commissioned the killing of the Waynes remains, and only one person knows the answer to that – The Lady.

Since he’s not rejoined the force, Jim is going to need help to find The Lady – fortunately (though he might not see it that way), nutty Barbara is back on the loose and now has an entrée to the underworld. Reluctantly he accepts her help.

Of course, we’re pleased to see two of Gotham’s most compelling females, Barbara and The Lady, back in action – Barbara’s become one of the most complex characters in the show, not even sure herself whether she’s motivated by love or hatred for Jim Gordon, and we reckon that one day she will get her wish and get to walk up the aisle with Jim, only this time not in handcuffs.

The Lady, meanwhile, as portrayed in endearingly crazy form by Michelle Gomez, is an essential link to the enemies of the Waynes.

Jim, his real self perhaps coming out from under the cover of his badge, goes on a rampage of violence (accompanied by the Sid Vicious version of My Way), and tracks her down to The Artemis, a women-only club. Of course, he needs Barbara’s help to get in, and she proves suitably devious in tricking The Lady into revealing the identity of the Waynes’ enemy – The Philosopher.

Bruce and Alfred, meanwhile, have tracked down Karen Jennings (Julia Taylor Ross), a contact of Thomas Wayne. She reveals a horrifying tale of abuse, murder, prison, and a chance of redemption through a Waynecorp facility called Pinewood Farms. Karen has been experimented on, her crippled arm replaced by a deadly bird-like limb; she uses it to good effect when assassins catch the three investigating Pinewood Farms.

In a horrifying scene, Victor Fries is thawed out long enough to freeze and shatter poor Karen. He looks dapper in his sub-zero spacesuit, but if it’s bullet-proof, why didn’t Jim shoot at his unarmoured head?

We now have a motive for the killing of the Waynes – kindly Thomas was trying to shut down Pinewood Farms – and a suspect, The Philosopher, who to no-one’s surprise turns out to be Hugo Strange.

We know the Pinewood experiments continue at Indian Hill, but if Strange is now sending the results of his craziness out into the world to kill for him, surely his downfall can’t be far away?

He has at least one more trick up his sleeve – with the help of Victor Fries’s serum, Patient 44 has been brought back from the dead.

Given the choice between Fish Mooney, Jerome Valeska and Theo Galavan, we wouldn’t have chosen Galavan for the revivification – surely the character has runs his course? But no, the revived Galavan is nuttier than squirrel shit, endowed with superhuman strength, and believes himself to be the immortal assassin Azrael – so that’s alright then.

Bat-fans will weep with joy at some of the references in this episodes – Pinewood Farms refers of course to Pinewood Studios, where Tim Burton filmed Batman, and there are nods to other DC Comics characters in the names of Thomas Wayne’s colleagues (Grant Gardner was the alter ego of Captain America in the 1940s serial, and Andrew Weininger, Paul Weathered and Travis Quegan are all art directors on various superhero movies).

But the coming of Azrael will really get fans sitting up and taking notice. The immortal assassin features heavily in Batman mythology, first as an opponent, then as an ally – at one stage, when Bruce Wayne’s back is broken by Bane, Azrael actually becomes Batman, but it doesn’t last, as he’s a bit too murdery to hang on to the position.

So will Galavan/Azrael turn out to be Jim Gordon’s most fiercesome opponent, or somehow an ally? Judging by the amount of killing and shouting he’s done so far, we’re going for the former. We can’t wait for the inevitable mayhem next week when Jim and Bruce go after Hugo Strange, and the monsters in his basement are unleashed.

For all our Gotham news and review, go here