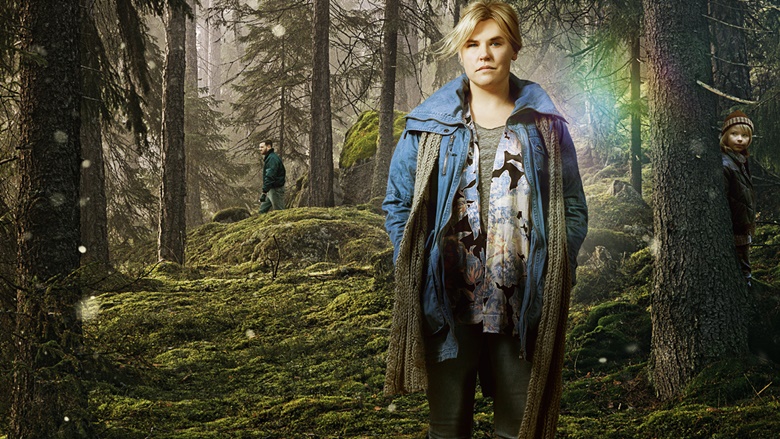 Yes, yes, this is almost a week late but what’s a reviewer to do when there’s so much crime drama on TV these days and not enough time to watch and review them all? Well, write a review that’s obviously a week late, that’s what. Ängelby, a 12-part Swedish series that debuted on ITV’s digital subscription channel ITV Encore, is a strange beast indeed and shares some similarities with another ITV Encore series, Jördskott, which was, you guessed it, also a strange beast. But as we all know, people lap up any old Nyponsoppa regardless of its quality, as they don’t really care which Scandinavian or Nordic country it comes from. As long as it keeps on coming. It just so happens that Ängelby is made from the cheapest ingredients possible.

Before we get to the town of Ängelby, there’s the hilariously cheesy opening monologue (which kicks off each episode). Over tinkling ivories, a soothing Swedish male voice recites some guff about light and darkness and power and future, as dreamy, forest scenes waft in and out of view. If you weren’t watching something that was made in 2015 you could have been forgiven for thinking that the programme makers had found an old VHS in a cupboard of a Swedish perfume ad from the 1980s. It was that cheesy.

Casting aside the awful intro, we soon met Vera Fors (Mia Skäringer), a down-on-her-luck single mum of two who has just been booted from her job. She’s broke, she survives on maintenance payments from her whiter-than-white, successful ex, she swears in front of her children when life gets too much for her, she drinks too much wine and she smokes cigarettes. I liked her instantly.

In a bid to show her ex that she isn’t totally dependent on him and his money, she applies for a job in a remote town called Ängelby and, within seconds, she receives a reply. She accepts the job and ups sticks to the town with her kids in tow. In the way there, driving deeper and deeper into the forest as she does, she runs over something. Horrified, she leaps out of car only to find the object she ran over was a teenage boy.

And this is where things get a bit silly. It’s an horrific incident, but instead of calling it into the police Vera decides to instead cover the boy’s body by the side of the road with some foliage.

We get the merest hint of remorse and regret, but not nearly enough. If it were me I’d be beside myself, but instead Vera busies herself meeting the town’s odd cast of characters. Her new boss is a wild-haired, wild-eyed, bad-suit-wearing strangeball called Torsten Huzell (played, incidentally, by Jördskott’s brilliant Göran Ragnerstam), who has a secret going on – at night he likes to be haranged and tortured by his accident-scarred and bitterly sado masochistic girlfriend, Britt-Louise. And that’s just the start of things. Soon she’s meeting the school’s teacher (who seems to be a bit of a witch who likes to put hexes on people), the local police force (actually quite normal), and the local school hockey coach (bonkers). Her kids don’t like it there, and her new job seems to consist only of tidying up Torsten’s bombsite of an office.

She also moves into Britt-Louise’s apartment (a huge painting of her hangs on the wall, seemingly watching Vera’s every move), and finally admits to the townfolk that she had mowed down a teenage boy, who turns out to be the local star hockey player. When a group from the town, including the two police officers, accompany her to the scene of her hit-and-run, the body is no longer there. Instead, the teen’s body is found a few days later in a shallow grave in a farmer’s field. It seems he had been dead before he hit Vera’s car, and then, inexplicably, moved.

What’s more, during the time between her confession and the discovery of the teen’s body in the field, there seemed to be a general shrug of the shoulders around the town. She wasn’t exactly accepted, but she certainly wasn’t ostracised, either. Add in some strange editing and direction (jumping inexplicably, seemingly missing bits out), some more of that awful, cheap piano motif, and Ängelby felt like it had been made for 10SEK. There’s some supernatural stuff floating about and the forest obviously has something going on in it, but it doesn’t have the same solid context as Jördskott and isn’t propped up with an interesting environmental theme.

No, Ängelby is pretty awful. It’s nowhere near as slick as Dicte, nowhere near as gripping as a Bridge or absolutely nowhere near as focused as The Killing, but it’s Mia Skäringer’s performance as Vera Fors that might just be its redeeming feature. She plays her with what feels like a natural warmth, and because she’s been dealt a tough hand (by the end of the second episode her husband has taken the kids back with him to Brussels, leaving her in Ängelby alone) I’m rooting for her.