Yesterday, I kicked off the countdown that every self-respecting, discerning crime drama fan had been waiting for (well, two of you): The Killing Times’ Top 15 Crime Dramas Of 2016. This year has seen an incredible variety of crime dramas, and numbers 15-11 reflected that: there was a horror/crime mash-ups, dramas based on real, true-life stories, and even a good, old-fashioned whodunit. So what’s next, and who makes the top 10? Read on! 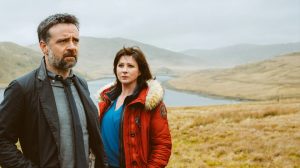 You know what you’re going to get with this solid Welsh series: careful, methodical procedural investigation, atmospheric rural settings featuring bitter, suspicious almost forgotten communities ground down by poverty, and, well, not very many twists. I say that as if it’s almost a bad thing, but it’s not. Y Gwyll goes against the grain of many modern crime dramas by telling stories slowly and thoughtfully. There are no flashbacks, tricksy devices or sleight of hand. And that’s almost refreshing. In this series there was some urgency and a slight change in some of the episodes’ construction, but essentially it was all about uncovering the Iwan Thomas story and the horrifying cover-up of abuse at the Devil’s Bridge children’s home, as well as police corruption. Another solid, stoic grind, that once was again if not a joy to watch, always intriguing and evocative, wrapping us up in a world that was at once beautiful and tragic.
For all our reviews of Y Gwyll, go here

9 Rillington Place, BBC1
At the start of December, the BBC broadcasted a three-part retelling of the John ‘Reg’ Christie saga, first seen on cinema screens in 1971. This new version was a revelation to those unfamiliar with the story and hadn’t seen the original, and the adaptation – by Tracey Malone and Ed Whitmore – used conventions more associated with horror films to keep us hooked. 10, Rillington Place became an organic character in itself; a place where life dies, its nooks, crannies and shadows hiding hideous secrets. Also keeping us hooked were two outstanding central performances – Tim Roth as Reg was a whispering, sinister abuser, arch manipulator and murderer, while Samantha Morton played doomed Ethel Christie with nuance and heartbreaking sensitivity.
For all our reviews of Rillington Place, go here

8 Line Of Duty, BBC2
The third series built on the successes of its previous two stories with another tense tale of police corruption. It was also the series that really catapulted Line Of Duty into the nation’s consciousness – the amount of social media interaction was off the charts, with viewers tweeting how much they were hooked. Once again, AC-12 were embroiled in another internal affairs mystery – a crack team of armed officers headed up by Sergeant Danny Waldon (Daniel Mays) are called to arrest a suspect holed up in a housing estate. When he ushers his team out of the room and the suspect dies, Waldon is investigated by AC-12 as a nailed-on abuser of his power and status. Except, things didn’t quite pan out that way. Instead, Line Of Duty then went on a spiralling, coruscating rollercoaster ride, where, in fact, dodgy DI Matthew ‘Dot’ Cottan (Craig Parkinson) and Lindsay Denton (Keeley Hawes) stepped forward onto centre stage. Even if the ending didn’t quite hold up, this third series of Line Of Duty was a thrilling, breathless experience and always audacious and bold.
For all our reviews of Line Of Duty, go here

7 The Missing, BBC1
In 2014, Harry and Jack Williams struck gold with series one of The Missing: a fraught, tense, emotional story about a, yes, missing child. They returned in 2016 with an all-new story, this time featuring a child who had returned from being in captivity, and showing what her re-emergence can do to a family and the investigators involved. Tchéky Karyo’s fabulous Julien Baptiste was again onboard, and this time the always-sensational David Morrissey and Keeley Hawes played the confused, broken parents. While the first half of the series was a jumble of dual timelines and a narrative strand in Iraq, the second half settled down into something fantastic and thrilling. In the end, the second series of The Missing presented us with characters who had been battered by war, all the while providing us with skilfully staged storytelling pyrotechnics.
For all our reviews of The Missing, go here

6 Thirteen, BBC3
I was fairly convinced at the start of 2016 that Thirteen would be in the Top 10 of any crime drama end-of-year lists, and so it has proved for this site. Featuring a career-best performance from Jodie Comer, Thirteen told the story of 26-year-old Ivy Moxam, who emerged from a 13-year stint in captivity unsure of her place in the world. Going back to a family who was, understandably, overjoyed to see her, we followed Ivy as she attempted to assimilate back into society. Except… there was a chance that Ivy Moxam wasn’t the real Ivy Moxam, with the two liaising police officers at loggerheads as to whether she was telling the truth or not. Perfectly played and perfectly created by newcomer Marnie Dickens, Thirteen took us one way and then the other throughout its five episodes, giving us a tense finale that encapsulated the key theme it explored: identity and ownership of identity.
For all our reviews of Thirteen, go here