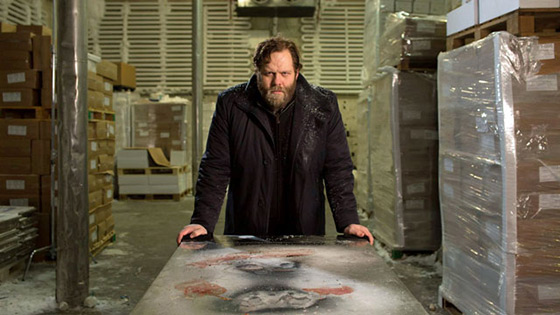 I don’t normally like to do write posts about award ceremonies (I like to focus on the programmes themselves and let other media outlets do that sort of stuff), but this seems to be worth shouting about. Trapped, The Killing Times’ Best Crime Drama 2016, has done ever so well – picking up, ahem, prestigious awards like ours and then going on to win plenty of others. It’s a staggering achievement from a show that really struck a chord with people. Now it has added another award to its trophy cabinet, this time it has been honoured for its writing.

The Writers’ Guild is a big deal in the world of writing, and some of the Guild’s award recipients are out of the top drawer. So it was great news to see yesterday that Trapped’s British writer, Clive Bradley, won the award for Best Long Form TV Drama.

Clive, who’s a friend of the site, told me this morning: “It’s absolutely amazing to be recognised by your peers – a really great honour. Trapped was a very collaborative project, and several other people were very important – Baltasar Kormakur, Sigurjon Kjartansson, Klaus Zimmermann and Sonia Moyersoen, who were all deeply involved in the development process.”

Clive beat out other nominees from Victoria, The Clockwork Prince and Spotless. Sir Tom Stoppard won the lifetime achievement award.

For an interview with Clive about Trapped, go here

For all our news and reviews of Trapped, go here