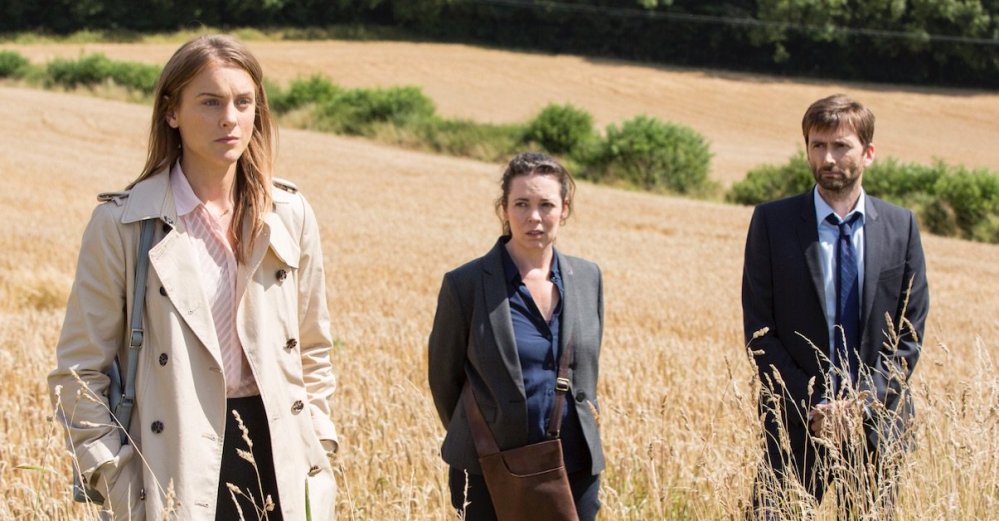 We’re over the half-way stage of this third and final series of Broadchurch, and so far it has been an intense, intriguing (and often heart-breaking) ride. Like so many good whodunits, the series has built up the suspects and our investigators – DI Alec Hardy and DS Ellie Miller – have been doing the rounds; getting to know them, getting to dislike them and trying to fit them into the puzzle where applicable. But unlike many whodunits, instead of some suspects falling by the wayside each of the main possibles are, after episode five, even likelier to have been the serial rapist that is now plaguing the coastal town. That means, after episode five and only three instalments left, we’re still none the wiser.

NB: Spoilers and theories inside

We finished episode four with plenty of theories – my main one being Tom Miller and Michael Lucas were somehow part of the sexual assault of Trish Winterman – but that kind of went out of the window when Laura Benson came forward and told Hardy and Miller that she had been raped two years before in a similar fashion to Trish.

The first act of this episode saw Hardy and Miller reassure Laura that her case, however retrogressive, would be taken seriously and with care. Laura had said that she hadn’t come forward at the time of the attack because she feared her state of inebriation and her dress (short skirt etc) would not sit well with a jury. (Once again, Broadchurch making very real and scything points about the way survivors are treated during sexual attack cases.)

Then it was down to business again, and, like last week, our main cast of suspects were taking turns to make themselves look guiltier than ever. Let’s take Jim Atwood. He had met with Trish, who had told him that she was planning on telling Cath about their tryst on the day of the party. Jim warned her not to – “you have no idea what you’re dealing with” – but when she did (there was a tense exchange between the now former best friends – Cath exclaiming surprise that a) Jim would sleep with someone like her, and most cuttingly (and disgracefully), b) why would anyone want to rape her?) Cath understandably threw her philandering husband out on his arse. Later in the episode, she whispered to him down a phone line that she could, at any moment, ruin his life. Does she know something about Jim that we don’t? Or are these the words of a bullish, hurt woman intent on causing some vengeful damage?

And then there was Ed Burnett. Ed, the manager of the farm shop, has looked like a loyal, if grumpy, character so far, although his interest in Trish occasionally veers onto the slightly creepy side. Tonight, when Cath confided in him that Jim had slept with Trish, he went round to Jim’s workshop and punched seven bells out of him. Violence from Ed. Noted.

With Aaron Mayford brought in for questioning and released on bail (even though there were links between him and the two assaulted women, uncovered by DC Harford), I genuinely don’t think it’s him – he’s too obvious, and I get the feeling that Harford, convinced of his guilt, will soon realise that the obvious ones aren’t always the ones, and will learn this through this experience.

We were then given more information – from Beth Lattimer’s boss, Sahana Harrison, who revealed that she had dealt with another, anonymous woman who had confessed to her that she had also been raped. So now there were three assaults, each carried out, as Miller noted, during the summer months and with the same modus operandi.

Throw in more loathsome behaviour by Clive Lucas, Ian Winterman breaking into Trish’s house (presumably to recover the laptop he desperately doesn’t want anyone to see) and cocky Leo Humphries – the fishing tackle man – leaping to head of the suspect queue (he had bribed his girlfriend to supply a false alibi, and then we saw the same kind of sock recovered in the grounds of Tadworth Hall worn by Leo during a five-a-side football match), and things were starting to bubble.

It was good that Mark Lattimer’s quest to find Joe Miller was kept to a minimum (I think we might get the confrontation between these two in next week’s episode, and hopefully a resolution to that story), but what interested me in this episode was the short scene between Hardy and his daughter, Daisy. She had been befriended by Chloë Lattimer in a previous episode. Why, we did not know. She had also been knocking about with some local lads. But now… she confided in a disbelieving Hardy that her phone had been stolen and a photo of her in a compromising position had been spread around the school. Two things occurred to me here: I felt dreadful for Daisy and thanked my own lucky stars that I didn’t grow up in such an aggressive, multi-media, sex-shaming teenage environment, and did this mean the theory that some sort of awful teen exploitation ring does indeed exist in the town? I also thought: HARDY’S HEART! (He seemed to have an aversion to mackerel, which is good for the heart, apparently, so maybe he should eating mackerel.)

So there we were: none the wiser, and many, many plates still spinning. It’s still well-plotted, well-written and well-acted, but I am expecting some of these suspects to start clearing off and the focus to narrow from next week. To be honest, I’m not sure if I’m looking forward to seeing what’s going to happen.

For all our Broadchurch news and reviews, go here