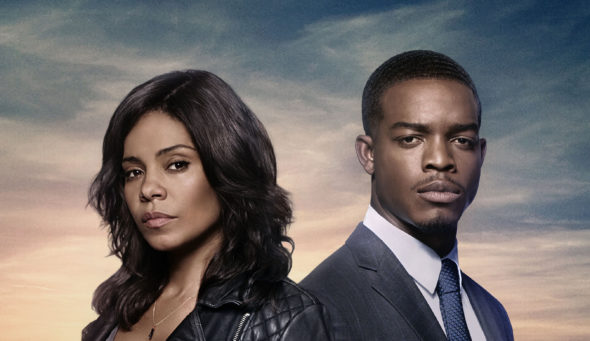 Shots Fired sounds interesting, if potentially controversial. And it boasts a starry cast: Sanaa Lathan, Stephen James, Helen Hunt, Richard Dreyfuss and Stephen Moyer among others. The news is that it has been picked up for UK broadcast by FOX UK, and we also now know when it will be transmitted. More after the jump…

This is the story:

A small North Carolina town is turned on its head when an African-American police officer kills an unarmed white college student. As tensions rise along lines of race, the neglected murder of an African-American teen is brought to light, reopening old wounds.

Leading the Department of Justice’s inquiry into these shootings is seasoned investigator Ashe Akino (Lathan) and a young Special Prosecutor, Preston Terry (James), both of who are African-American. As they start to peel back the layers of both cases, they suspect a cover-up that may involve some of the state’s most powerful people, including fiercely political North Carolina Governor Patricia Eamons (Hunt). She’s in a tough re-election fight, and the recent shootings in her state are making it even tougher. Meanwhile, real estate mogul and owner of a privatised prison Arlen Cox (Dreyfuss), is pulled into the volatile debate over policing in the town, and Lt. Calvert Breeland (Moyer), a seasoned veteran in the Sheriff’s Department, gets caught in the middle of the investigation. As Ashe and Preston navigate the media attention, public debate and social unrest that come with such volatile cases, the 10-part series tackles the racial divide from every seat in the house.

It started in the US on 22nd March, and it’ll start on FOX UK on 4th June.