There’s no doubt about it, Top Of The Lake: China Girl is an extraordinary examination of femininity and motherhood (more on that later), as well as a graphic and explicit indictment of the way men view and treat women, both in the workplace and in society as a whole. I’ve read some reviews of the first episode that stated that it was preposterously pretentious and yawnsome, but I just didn’t see that – I thought it was beautifully paced, often beautiful to look at, superbly and uniformly well performed, and featuring a story that was brimming with quirky, interesting characters and supreme darkness. Yes, Robin Griffin is the type of tortured female detective that we’ve seen a lot of in crime drama during the past five years, but I don’t mind watching another one go on her journey – as long as her reasons for being traumatised are believable and not just tacked on for effect, I’m fine with it because these are stories that still need to be told.

And we certainly saw in this episode how and why Robin is so on edge. The opening scene took us back to New Zealand to show what happened in her final moments there on the island. Her partner Johnno Mitchum (who seemed to be played by a different actor) was carrying on with another woman and was busted for having a sack of weed on his person. On his wedding day to Robin. She stormed into the holding cell at the police station in her wedding dress, with her entourage and a minister in tow – out of defiance perhaps, she was going to marry him there and then. But then she saw the young woman with him in the cell and was told about the sack of weed and she stormed off. The post-wedding party was not a celebration, it was more of a ceremony – she and her friends burnt the wedding dress on a big fire on the beach. 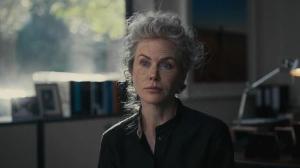 Back in the present day and back in Sydney, we also got to see Robin’s relationship with her estranged daughter Mary develop considerably. She delivered a note to Julia and Pyke’s door, saying that she wanted to meet with Mary – the long-lost daughter that had plagued her dreams and eaten away at her conscience. Before the meeting with her daughter, there was an awkward meeting with Julia and Pyke first – Pyke being nice and Pyke-ish and Julia being fierce, angry and every so slightly exasperated by everything, as she always seems to be. Here, themes of what it is to be a mother surfaced, with Julia telling Robin that it was because she ignored Mary’s letters that she had turned into a nightmare. When Julia left the room, Pyke explained rationally that Mary’s unstable behaviour was also perhaps because of his and Julia’s break-up.

Still. The meeting between Robin and Mary came quickly and unravelled in unexpected ways. Mary wasn’t emotional at all – she tried her best to act grown up and matter-of-fact about the whole situation (“You didn’t abort me… yay” and “So I’m too much right? Too intense, too needy, too direct”) – but there were chinks of vulnerability. She was even direct and matter-of-fact about the fact her father was a rapist (see, I told you Robin had just causes to be on the edge).

These interactions – especially between the female characters – were beautifully written: there was a rhythm and precision to them that was short on exposition and long on snap and insight. An insight into feelings, emotion and female roles within society: motherhood, parenthood and everything else.

But with meeting Mary, Robin’s professional and personal lives were about to collide. Mary, of course, has a fiancé, and that fiancé – Puss – was embroiled in the case of the China Girl. He might even be her killer.

In this episode, we got to know a bit more about Cinnamon. Neeson and his cronies were still meeting up in the cafe, comparing notes, poring over dirty websites and rating the sex workers they had been with – you can’t get much more objectifying than that – although their interactions with women in the real world were both funny but also wince-inducing and tragically sad. One of their number, Brett, was particularly worried about the disappearance of Cinnamon, his personal favourite. He’d hired her for a Girlfriend Experience and was in love with her. He visited the brothel to see where she was and told her co-workers that they were planning to go away on holiday together. They laughed at him and asked sarcastically if he realised that she was a sex worker. They also told him that she said that to all her clients. Brett was crestfallen, and Puss menacingly walked past the door of the room Brett and Cinnamon’s co-workers were chatting in.

You can’t help but think that Brett might stick his nose into things to the point that he’ll put himself in danger.

So the case. Battling through some high-level and unconcealed misogyny from Sizzla and Badger (yes those are their real character names) Robin reluctantly allowed Hilmarten to work with her (she’s still excellent value – her scene with Robin’s brother was hilarious) and they started to do the rounds around Sydney’s Asian-themed brothels. They centred on the one Cinnamon worked at.

They also found out that she was pregnant at the time of death. Not only that but, in the final scene, Ray the pathologist (why is the pathologist in every single crime drama the quirkiest and coolest character of the lot) told Robin that the DNA of the foetus did not match that of the victim.

Cinnamon was a surrogate.

For our episode one review, go here