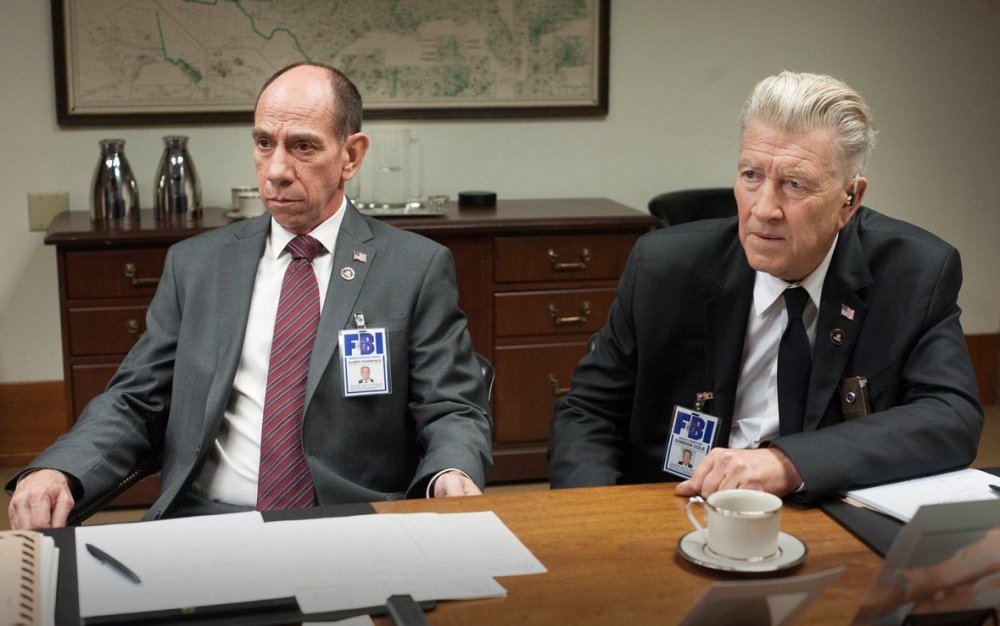 Despite it being frustrating and hard going at times, I’m greatly enjoying the third series of Twin Peaks, David Lynch’s cross-dimensional crime drama, which finishes with a two-part finale on Monday 4th September. Throughout the 16 parts so far, we’ve caught up with old favourites, found out how they’ve been created, met new characters and have been plunged into new mysteries. One of the absolute delights, though, has been spending more time with FBI Deputy Director Gordon Cole (Lynch) and FBI Special Agent, Albert Rosenfeld (the late, great Miguel Ferrer). They’ve crucial roles as the the splintered personality of Agent Dale Cooper has slowly resolved itself, and the more I’ve thought about it the more a spin-off series featuring these two would make sense. So David Lynch, if you’re reading…

Gordon and Albert have been terrific value in this third series. As they grapple with the reappearance of Dale Cooper (Bad Coop) in South Dakota, recruit Tammy Preston into their ranks and re-engage Diane they’ve not only been comedy gold (the pauses, the inane dialogue, Albert’s trademark cynicism and Gordon’s excitable approach) but also intriguing. There was a sense that in the original series Albert viewed Gordon with withering acceptance, while in this series there’s a real sense of friendship, trust and loyalty between the two; a shorthand that can only exist after decades working together.

Another intriguing element that has surfaced in this series is the explanation of the Blue Rose task force the FBI set up back in 1975. One of the enduring symbols throughout the whole of Twin Peaks, Blue Rose has always been shrouded in mystery. But now we know what it’s all about thanks to dear Albert, who explained to new recruit Tammy what it was all about. He recalled the very first case the task force worked on: it was strange tale of a doppelgänger(or Tulpa), Lois Duffy, who said in her final words: “I’m like the blue rose”.

The roots of Blue Rose lay in its predecessor, Project Blue Book, which was set-up in 1970 by that dirty old sod, Richard Nixon, to investigate UFOs and other so-called paranormal activities. According to Twin Peaks’ timelines, Douglas Mitford – a US Air Force officer – was recruited to head up the project. Blue Book was closed down, but by the 1980s Blue Book had morphed into Blue Rose, and, in 1982, Gordon Cole was brought on board and established Listening Post Alpha in the Twin Peaks region. Phillip Jeffries was recruited next, and along came Albert, Cooper and Chester Desmond.

Wouldn’t this be a fantastic series? To go back to the mid-to-late 1970s, meet younger versions of Milford, Cole, Jeffries and Rosenfeld and follow their Blue Rose investigations. To perhaps find out more about both Black and White lodges, and, of course, to enjoy more fantastic interaction between our two FBI men.

If there was to be a Blue Rose origin series, new actors would have to be found. But a Blue Rose series set in those heady days of the late 70s and early 80s would be a hoot.

And what of Lynch’s involvement. Twin Peaks is very much his and Mark Frost’s baby, and he’s very much an old-fashioned auteur, working best on a long leash (if any leash at all). Whether he would want to go back and tell this story is questionable, but look what Noah Hawley has done with Fargo. he’s taken the Coen brothers’ original movie and – with Joel and Ethan as executive producers – fashion a pitch-perfect anthology series. Lynch could hire someone and oversee the project.

So how about it David?

For all our news and reviews of Twin Peaks, go here