Even though he’s never had a name, Gabriel Flores Jair’s obducent has always been one of our favourite peripheral characters in The Bridge. 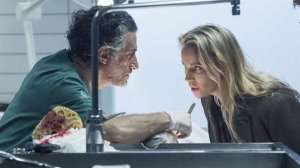 He is gravel of voice and matter-of-fact of disposition and someone that Saga seems comfortable with – perhaps his approach to crimes from an ultra-scientific angle suits her own ways of thinking. Gabriel Flores Jair plays what we’ll call The Pathologist With No Name, and the Swedish actor was good enough to sit down with us to answer a few questions.

Just a few notes on Gabriel, who has led an interesting life. He was born in Córdoba, Argentina, and came to Sweden in the late 1970s, aged 10. He grew up in a theatre family who left the art world for political activism against the Argentinian dictatorship established by the military coup d’etat in 1976. He started acting when he was 25-years-old and has worked with a fringe theatre group in Malmö, Teater Insite.

So that’s Gabriel, then. And this is what he told us…

I warn you now, this is a really, really fascinating interview.

The Killing Times: Your character is listed without a name. Does that bother you? Do you always have a name that you call him?
Gabriel Flores Jair: My character not having a name has not bothered me, ever. Thing is, this made my character a bit mysterious, and not in an exotic way, but more in the sense that it was in tune with the drama in the script. I guess one could think that my character not having a name could be read as me not being white in a white context, and was a way of making me anonymous. But I never felt this was the idea. And yes, I do have a name for my character. But it is something that I have kept to myself until now. I decided long ago that his name was David.

Me and Rumle Hamerich, the Danish director of The Bridge, had a talk about my character and Rumle helped me a lot in trying to figure out who this guy was. The questions one always asks oneself are the classic philosophical ones: where do I come from, who am I and where am I going?

I have worked with theatre, especially with a theatre in Malmö called Teater Insite, for many years and it is crucial, to me, having answers to these three questions I have mentioned.

So, me and Rumle sat in an office and talked. One of the questions was: why did my character become a pathologist?  I told Rumle that David started to draw when he was a child and he found himself becoming more and more interested in drawing the human anatomy. He loved to see Leonardo Da Vinci’s drawings of the human body and through Leonardo David found his way into pathology. He wanted to understand the human body and to really comprehend everything concerning it. He is driven by very strong empathetic feelings towards humanity and I had to work with the idea of this pathologist who really loves humanity and faces the terrible things some people are capable of doing to each other.

TKT: Your character is always one of our favourites, and many Bridge fans love your character – he plays a crucial role in the stories and Saga always goes to him for advice. What’s his relationship with Saga do you think?
GFJ: This is an easy one! You see Paul, my character is a nerd and so is Saga. I personally love people who are nerds. My definition of a nerd is a person who is really, extremely, interested in one or more subjects and knows everything about it.  I mean, being a nerd was my starting point for David, my character, and me and Sofia [Helin] were, from the first moment we talked about Saga and David, on the same page that our characters were friends. Real friends. Not playing silly gender stereotypical male-female games. Friends, almost like family members. We could talk and say anything, and everything, to each other and see, really see, the other.

TKT: Saga is such an incredible central character, what is your opinion of her?
GFJ: Saga is one of the strongest, intelligent, honest, complex, beautiful and human characters I have ever had the honour to meet. And I believe this combination of qualities in a character makes it more believable and a lot easier to recognise and mirror certain parts of one’s own character. The other very important aspect is that Saga is a female central character. This is very important, not only from a political point of view, but from a human point of view. I mean, here we meet somebody who combines characteristics that traditionally have been attributed to male characters – but now they are combined in one character and she is a woman!

I have heard certain male figures say very bad things about Saga. Things like “in real life, she would never be accepted to the police academy” and many more stupid things like that. But you know what guys? Learn to live with it. Plus, this is fiction!

I had to grow up with bullshit male heroes and get a twisted idea of what it means to be a man. So hey, suck it up. Look at her, she is a woman expressing all those things you thought were reserved for male leads. One more thing guys: she, Saga, expresses all those things with love not hate; she acts seeking the truth not revenge. 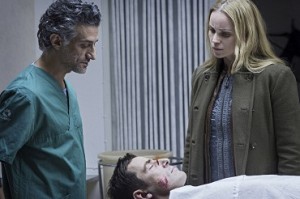 TKT: Your character is a pathologist. Did you have to learn the medical terminology for the role?
GFJ: Well, on some occasions there were a couple of real-life pathologists on set. So yes, I had the opportunity to ask some questions. Most of my questions where mostly about practical things like; how do I grab hold of this tool or how do I lean, if I do, on this equipment or what is the purpose of this, or that, tool?

The terminology I looked up on the internet by myself. I believe that it is my responsibility as an actor to do all this research.

TKT: Your character is always there in the pathology lab, but in series three he did get to go to the funeral (where he was castigated a bit by Saga). Will there be an opportunity for your character to get out and about for some scenes in series four?
GFJ: Haha! Yes, I remember that scene! My character made an honest mistake that time…

Sorry Paul, can’t, and won’t, do that. If I tell you I will be taking the joy of expectation based on not knowing what is going to happen. Besides, I am bound by contract not to tell. But more important than that is the fact that I want you, the viewers, to really experience the development of the drama without preconceptions.

TKT: Aside from Saga, Henrik and Linn, there is a big ensemble cast, especially inside the police station. What is the atmosphere like on-set?
GFJ: First of all I want to say that there are a lot of people working on such a production. The majority of those faces you, the viewers, never see. I am talking about the big crew of co-workers on set that arrive much earlier than we, the actors, do and who leave the set much later than we, the actors, do.  Yes, it is a team effort. We, all of us, make it happen. But I will never forget all the crew members behind the camera working like working like bees and being so professional in every aspect and tiny detail. And don’t forget all the extras, all those people who showed up and also brought life into it.

Working with Sofia is very easy because her character is so true, so very human, that I always had these nanoseconds when I could see Sofia turning into Saga that, to me, where magical to watch.

I miss Kim Bodnia. He is a great guy and a very good actor. I know some people see him as a bit terrifying, like this big Viking ready to explode, but he is a great guy and he has the capacity to express a character’s every thought with his eyes. It is amazing to see. And he is like Thure, they both have this very sharp sense of concentration. They are very focused on what they are doing. Once, on set, Thure noticed that I was not really there so he turned to me and said, very low, “Hey, Gabriel…” and I immediately understood and shaped up.

Being on The Bridge was a true eye opener, a learning experience, of being an actor in front of the camera. I had previously worked in Goran Kapetanovic’s short film From Above and in Missing, a Wallander movie. But on The Bridge, I really learned what it takes to act in such a context. Now, one of the things that I felt year after year on set was this very strong ambience of, “let us do our best to show our audience the story we are about to tell, let us give them something to really bite into, let us take them on a journey into our universe and let us share them with all kinds of emotions”. This was such a powerful thing to experience every day on set and not only on the first season, this was the atmosphere every time during all those years throughout all four seasons. Can you imagine what it feels to work with people who are capable to do that? I am so thankful, and proud, to have been part, a tiny part, of that. Honestly, I am lost for words…

TKT: Finally, The Bridge has been such a huge success around the world, what, in your opinion, is the reason?
GFJ: Oh, this is one of those questions I could easily answer by saying Hans Rosenfeldt or I could just tell you to read all of the above… But no.

Only just imagine: Hans Rosenfeldt drafted the idea, together with Måns Mårlind and Björn Stein, and then he starts to write the script and then this huge machinery starts to work and then a friend of mine texts me one evening, saying: “My husband, my children and I have just turned on the TV here in Tel Aviv and the first face we see is yours! And the lead, she is great! And what a story!”

Listen Paul, I don’t know. My guess is as good as anyones. All I know is that we all worked very hard and we had a very intelligent, strong and human lead with a huge responsibility on her shoulders and we all did our best to tell the story. This is just one story. But a very different story. And if those different stories multiply and give us a different view of the world then another world is definitely possible.

FOR ALL OUR NEWS AND REVIEWS OF THE BRIDGE CLICK HERE