Is this Icelandic series the next big Nordic Noir?

As eagle-eyed readers will have noticed, I’m in Reykjavik this week for the Iceland Noir crime fiction festival (see my reports here and here) and, as luck would have it, a show I’ve been keeping my eye on – The Flatey Enigma – premiered on Iceland’s state broadcaster RÚV on Sunday night.

There was only one thing for it – huddle around a laptop (my Air BnB) doesn’t have a proper TV – and give it a watch, even though, naturally, it was broadcast in Icelandic and I can’t understand Icelandic. So it was a challenge, but I gave it a go.

The four-part series has an excellent pedigree: adapted by Margrét Örnólfsdóttir (Fangar, Case, Pressa and Trapped) from Viktor Arnar Ingolfsson’s novel, it’s been made by Sagafilm, the production company behind The Bridge, and has been picked up by  the likes of DR in Denmark, YLE in Finland, NRK in Norway, and SVT in Sweden. 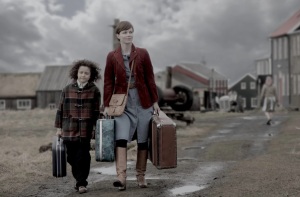 Set in the early 1970s, it stars Lára Jóhanna Jónsdóttir as Johanna, a single mum and a professor of Nordic studies. She returns home from Paris to the remote west-coast island of Flatey to attend her father’s funeral. There she reacquaints herself with island life – the close, small community, the incredible scenery and landscape and her family, chiefly her sister, who seems to be the complete opposite of Johanna, an urbane and a free spirit.

She also reacquaints herself with her father’s work, namely ancient maps, books and strange scrawlings. His office is plastered with half-written notes, scrawls and indecipherable musings. He’s been working on something… something he couldn’t finish. But what?

For the funeral, a Danish cryptographer comes over to attend (he’s played by old favourite Søren Malling from The Killing and The Bridge). And that’s where I’ll leave the plot, although I will say a dead body is found on one of the islands Johanna’s father had been observing.

Obviously, I couldn’t follow everything because of the language, but I got the drift of what was happening. The first thing to say was that The Flatey Enigma looked fantastic – it was very filmic, and those old, coastal wooden shacks you only see in Scandinavia and the Nordic countries were incredibly evocative. Inside, there was lovely natural light and dark woods and cosy furnishings. The sheer, unvarnished look of the series will be a dream for Scandi and Nordic Noir lovers.

What I also liked about it was the pace. It was slow, measured and considered, with island and family life the emphasis for the most part of this first episode – namely, Johanna’s relationship with her family, the island community and the island itself. As for the character of Johanna, she’s instantly likeable, but a key flashback revealed that she’s been hiding a secret or two.

Add in a sinister policeman who is sent to investigate the murder, some fantastic 70s fashions and music and yes, that landscape, and we could be onto a winner here.

It has BBC Four written all over it, but no UK broadcaster has been named yet.

Now, I’m off to brush up on my Icelandic.