What’s the story?
Carnival Row is the latest exclusive show from Amazon Studios for Prime, in its ongoing bid to rival Netflix’s original content – and whilst it’s competitor may seem a little risk-averse to new ideas these days, Amazon is apparently still quite happy taking a punt on some of the more wild and weird concepts out there. The show is based on what was originally a decade-old film script tasked to horror maestro Guillermo del Toro as director before it found its way through development hell into becoming a TV show with Orlando Bloom serving as both producer and lead actor.

The world of Carnival Row is one where fantasy and reality have merged, with the creatures of folklore (known here collectively as the “Fae”) mingling with humankind in a steampunk-inspired faux Victorian era. Bloom stars as Rycroft “Philo” Philostrate, a veteran detective policing a city-state called The Burgue, which operates as a neutral bulwark against the encroaching Axis-like forces of The Pact – a coalition of nations determined to enslave the Fae. The Burgue operates as an analogue of Empire-era London and New York mushed together, with the majority of the immigrant Fae escaping the Pact’s clutches ending up on in the slum streets of the show’s title.

Into this milieu steps Vignette Stonemoss (Cara Delevingne), a fairy who has spent much of the past few years as a “sparrowhawk”, trafficking her kin out of wartime slavery on one side and into indebted servitude on the other for the aristocrats of The Burgue. Shipwrecked after fleeing a Pact attack, she ends up penniless and alone in Carnival Row before reconnecting with Philo, a former lover she thought was long dead. The pair slowly resolve their differences over the span of the season, as they spearhead an investigation into a serial killer murdering Fae folk across the city. 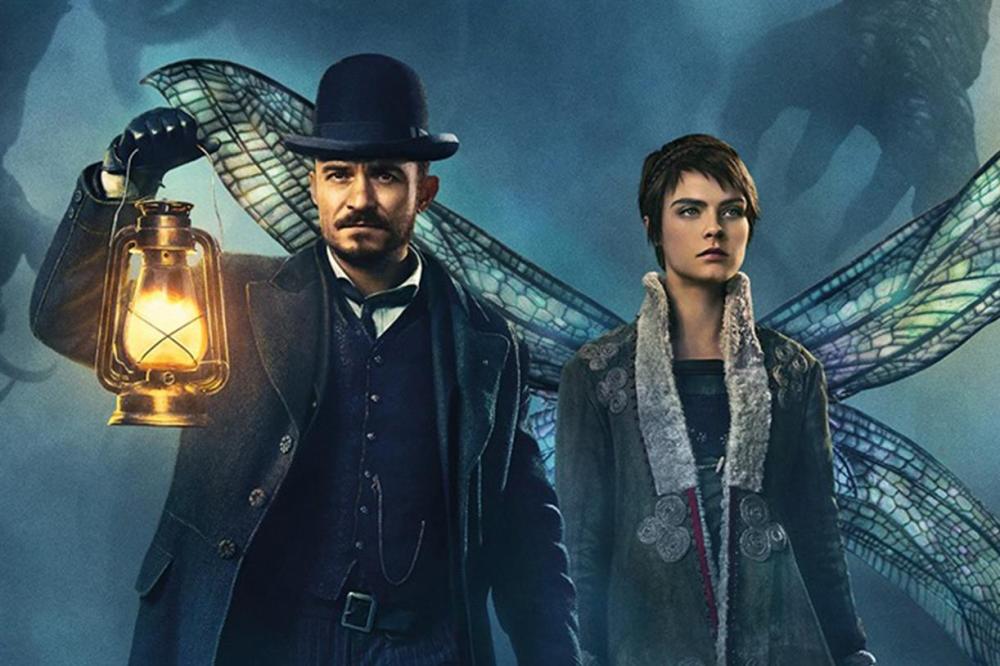 What’s good about it?
The first thing that will strike you about Carnival Row is that Amazon has clearly opened up its wallet substantially for the show. The world-building on display here is breath-taking, with sets and location shoots (mainly in Prague) merging to produce some very fine visual treats indeed. Likewise, the costume design is meticulous, and alongside the make-up and prosthetic elements of the various races that comprise the show’s universe, it does its job expertly in drawing the viewer into the fantasy setting.

Carnival Row is also a big show, and the cast of characters introduced can be a little overwhelming at times, but the calibre of talent here is not to be sniffed at. Karla Crome, Jared Harris, Indira Varma, Alice Krige and Mark Lewis Jones are all on board to lend the show some great character actors through its myriad second-story plotlines, and there will be more than one occasion where you’ll be reaching for IMDB to place all the memorable faces that pop up along the way.

What’s bad about it?
Unfortunately for a show that pivots on its leads’ shared chemistry, there’s about as much spark between Bloom and Delevingne as a wet matchstick. Both make a frankly bizarre decision to try on ridiculous accents for the duration of the show (Mockney Hardman and Oirish Waif respectively) that wander repeatedly and also serve to undermine the basis of the world around them, as no other characters converse in the same dialect. Delevingne’s acting resume is slight but she makes a decent fist here of the job in front of her – but Bloom has no such excuses as he chews the scenery around him every time he pops up on screen.

Whilst the show is a new IP in terms of its concept, you will feel the familiar twinges of other shows running through its storylines and as such there are few surprises to be had along the way. It’s clear it aspires to be vast and intriguing in a similar vein to Game Of Thrones, but can’t replicate the level of Machiavellian exploits that show built its fame on. Rather, it feels like a poor mix of Gangs Of New York and Lord of The Rings, without achieving either title’s grandiose narrative heights.

The crime aspect of the show is also relatively scant, with what sleuthing there is is largely laughable in its simplicity. On paper, the show is pitched as a neo-noir murder-mystery but this consistently plays second fiddle to the volatile relationship at the core of the show. In this, it has more common with a show like Outlander as an alternative historical romance drama, and should absolutely be viewed as such to save any disappointment.

Why it’s worth a binge…
If you enjoyed the similar tropes of Netflix’s Bright or Amazon’s own American Gods, you’ll find plenty to enjoy here – and with a second season already commissioned, there is more to come.