For the sixth straight year, we’re going to be counting down our favourite 20 crime dramas of the year, because who doesn’t love a list at the end a year?

This year, as ever, there has been a lot – a LOT – of crime dramas, on channels and streaming services here, there and everywhere. Was it a classic year? Some of the big guns were back – Mindhunter, Line Of Duty etc – but the beauty of watching crime drama is discovering new adaptations, new actors and new characters.

In 2019 we had plenty, which sat handsomely alongside some of our returning favourites.

But before we get into it, it’s worth taking a moment to acknowledge those that didn’t quite make our Top 20. We enjoyed ITV’s Manhunt, Endeavour and Vera, and the BBC’s Guilt, Luther, Safe Harbour and The Name Of The Rose. We also enjoyed Sky Atlantic’s Big Little Lies and S4C’s Welsh crime dramas Un Bore Mercher and 35 Awr, as well as Icelandic series The Flatey Enigma, which ended up on BBC Alba in the UK. Peaky Blinders, as ever, was full of style and intrigue.

But now the wait is over. It’s time for the countdown.

As ever, if you agree or disagree, drop us a comment to let us know what you think. 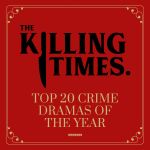 20 Shetland (Series 5)
BBC One
Jimmy Perez and co make this list yet again for the sheer consistency of its body of work.

Now into its fifth season, this solid series – based on the books by Ann Cleeves – was once again telling a powerful story. What could be a cosy crime series (Monarch Of The Glen anyone?) chooses to deal in difficult stories that challenge the island stereotype as a picture-postcard setting.

Bad things happen in Shetland, and this time around Jimmy and co investigated the disappearance of a young African man who vanished after coming to the islands on the overnight ferry. This leads to a disturbing case of people trafficking, a race against time to find and save those who are still being held against their will and a trip to Jimmy’s old stomping ground of Glasgow.

There were other things in play here – Jimmy was beginning to move on from his late wife, and Duncan and his daughter Cassie had some big decisions to make.

READ MORE: FOR ALL OUR NEWS AND REVIEWS OF SHETLAND

19 Bordertown (Sorjonen) (Series 2)
Netflix
Ville Virtanen returned for another series as Detective Inspector Kari Sorjonen, the borderline autistic cop who moved back with his family (wife Pauliina and teenage daughter Janina) to small-town Lappeenranta, which sits in the Karelia region on the border with Russia.

Throughout this series’ 10 episodes, we got five two-part stories, and, as ever, Sorjonen was a charismatic force at the centre. There was a whiff of Sherlock Holmes about him, too: someone so brilliant and gifted that he sometimes got bored with the norm. He was turned on by a challenge and the challenge of following clues and deciphering their meanings, and anything less saw him switch off.

In this series, his family were given equal weight, which was welcome when you think about Sorjonen’s own difficulty when it comes to social situations and showing his emotions. Pauliina’s brain tumour returned in this series, which saw Sorjonen have to deal with things he’d never dealt with before. And special mention must go to his daughter, Janina, who was not only getting to grips with becoming a young woman but also displaying the same sort of gifts as her dad. These three made for a really great family unit, and their stories and dynamics gave Bordertown a strong, distinct dimension.

READ MORE: FOR OUR REVIEW OF SERIES TWO OF BORDERTOWN

18 A Confession
ITV
If there was a trend this year, it was the amount of really good dramatisations of true crimes.

This one starred Martic Freeman as Steve Fulcher, a copper in Wiltshire who was on the hunt for not only a missing teenage girl, but subsequently her murderer. When he did finally catch up with cab driver Christopher Halliwell, it became a battle of wills to extract some sort of confession from him. In desperation against a slippery foe, he decided to bend the rules and interview him without a lawyer present, and initially it paid off – Halliwell led him to the body of Sian O’Callaghan, but also told him about another victim – Becky Godden – and her place of burial.

From that moment the families of Sian and Becky (including the excellent Siobhan Finneran and Imelda Staunton) were fighting to find justice for their girls in a case that threatened to collapse at any moment. For Fulcher, his career was on the line.

READ MORE: FOR OUR REVIEW OF A CONFESSION

17 The Capture
BBC One
Starring Holliday Grainger and Callum Turner The Capture was a classic cat-and-mouse chase thriller a la North By Northwest and The Fugitive, but brought bang up to date.

Turner starred as Shaun Emery, a volatile Afghanistan vet who had just been cleared of murder while in theatre. On the very same night of his exoneration, he drunkenly accompanied his lawyer to her bus stop and leaned in for a kiss, but on CCTV he was seen assaulting her. And, when the lawyer herself goes missing and was later found dead in the boot of a car, Callum became a murder suspect on the run. Following him was Grainger’s DI Rachel Carey, a hotshot young detective who had precociously ascended the ranks.

At first adversaries, and then finding themselves on the same side, together they tried to expose nefarious secret agencies within the security forces.

With a breathless pace, The Capture had a bit of the Line Of Dutys about it, but there was something interesting and terrifying about this six-parter – the fact that everything we believed to be true and some of the things we hold most dear (our very own identities) could be manipulated and used against us.

READ MORE: FOR OUR REVIEW OF THE CAPTURE

16 Waco
Alibi
Another true-crime dramatisation, this time we headed to Texas to watch how cult leader David Koresh manipulated and gently coerced a group of lost souls to follow him until the whole place went up in flames.

We knew the outcome to the siege of the Branch Davidians in Waco, Texas, in 1993, but this excellent series put so much more meat on the bone. It presented cult leader David Koresh not as a cartoonish, fire and brimstone preacherzilla but as a nuanced human being – a deeply narcissistic, deluded one, at that – and the people who chose to stay with him to the bitter end also as real, broken human beings.

And right up until the last moment, when a fire ripped through the compound killing 76 people, there was a sense that a way out could be achieved.

The series has been criticised in the US for presenting Koresh in a sympathetic light, but we disagreed – this series presented him as a monster, but a monster not in the two-dimensional, cartoonish villain way. Koresh was sly. A nerdily charismatic leader, he excelled at slow-burn persuasion and pressure. He was a complex character, and this series afforded a portrayal that fit his personality. Tyler Kitsch, in the lead role, was absolutely superb, nailing his curious charm, and occasionally baring his teeth in moments when that charm slipped.

But we also saw the FBI’s role in the whole sorry saga, and in the end were left with the feeling that if it wasn’t for two deeply entrenched sets of people, this tragedy could and should have been avoided.

READ MORE: FOR OUR REVIEW OF WACO