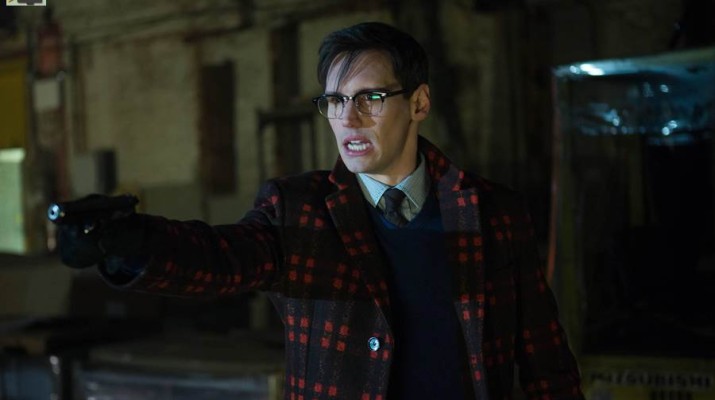 Have you ever been disappointed when your TV hero escapes from jail? We were, a bit, last week – not only because we were enjoying seeing how James Gordon took to life in the slammer, but also because we thought the villains deserved a bit of a rest from his relentless interference.
Anyway, he’s out, and our anticipation of enjoying seeing Jim peeling potatoes and fending off unwanted attention in the showers has come to nothing. We’ll just have to get interested in his pursuit of whoever framed him for murder again.

Of course, we know it’s Ed Nygma, and if Jim was any kind of a cop, he’d know it too – if only because all the evidence revolves around carefully faked forensics and police documents, so it’s clearly an inside job. But Jim doesn’t work it out until he goes to Ed for help, gets knocked out, and wakes up to find the grinning loon trying to stuff him in his trunk.

Jim escapes, and goes to Selina, who is still squiring Bruce Wayne around the grittier side of town. Incidental pleasures include Bruce’s cavalier attitude to stolen money (it’s easy to give it way when you have plenty of it, young man). Selina finds herself drawn into a plot to capture Ed, by luring him to the spot where he buried Miss Kringle.

We’re not quite convinced that all those fat cops could hide behind those bare trees, but the snow-bound scene where Ed is caught is charmingly reminiscent of Fargo, and we did like his final despairing groan, ‘Oh, crud…!”

Ed, we’re sure, is bound for Arkham, where no doubt his criminal tendencies will be cultured by Professor Strange.

Meanwhile Penguin has been reduced to the status of an abused servant by the hateful family of his deceased father; he’s on the edge, of course, and all it takes to tip him over it is the discovery of the decanter used to poison Elijah Van Dahl. We didn’t quite anticipate the nature of his revenge; serving up Grace’s children as tasty joints of meat sounds less like the act of a Penguin, and more like cannibalistic hitman Eduardo Flamingo – but the point’s lost on Grace, or at least it is until Penguin fillets her.

Hooray! Bad Penguin is back, Riddler is in the house, Jim Gordon’s pardoned and gets a grudging handshake from Captain Barnes, and Bruce is back from his sojourn in the city, splitting with Selina in order to secure the aid of Alfred and Lucius Fox in the quest to find the killers of his parents.

But there’s another twist – Barbara Gordon is declared sane by Professor Strange (and we know what that means, she’s as nutty as squirrel shit), and she’s released. We’ve never been more sorry for poor Barbara – where will she go now (particularly as she murdered her parents)? Of course, first she goes to Jim, who welcomes her with open arms – no, wait a minute, with a look of horror.

Two scenes vie for the honour of being most squirm-inducing in this episode – the one where Penguin roasts two children and stabs their mother, and the one where Bullock uses his sexual charms to get favours from Internal Affairs. We know which we found the more disturbing.

A great episode, then, which finally ties up the Ed Nygma plot – all he has to do now is escape from Arkham and buy a green suit – and which brings Barbara back into Jim’s life. With Lee hiding out Down South, could Jim be tempted back into Barbara’s mad, grabby arms? Well, she does look pretty good for a convicted murderer, and she always had great dress sense. We reckon Jimmy Boy is riding for a fall, again.

For all our Gotham news and reviews, go here